President Duterte has condemned recent events in the South China Sea in which Philippines vessels were confronted by the Chinese Coast Guard, saying it speaks poorly of relations between the two nations.

Speaking on Monday, Philippines President Rodrigo Duterte responded to last week’s flare-up in which Philippines boats were fired upon by Chinese Coast Guard water cannons at the Second Thomas Shoal (known as Ayungin Shoal in the Philippines). The vessels were delivering supplies to marines stationed on the atoll; Beijing, which claims the islands, said the boats hadn’t requested permission to enter. 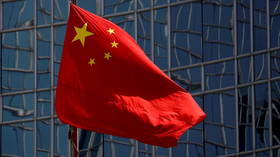 China follows through on its vow to ‘punish’ Lithuania over Taiwan

“We abhor the recent event in the Ayungin Shoal and view with grave concern other similar developments,” Duterte told the meeting of the Association of Southeast Asian Nations and China.

“This does not speak well of the relations between our nations and our partnership,” the outspoken leader added.

The president, who will leave office in 2022, has attempted to improve relations with his Chinese neighbors during his tenure. However, Beijing’s claims over vast swathes of the South China Sea, including islands and atolls just off the Philippines, have continually challenged diplomatic ties. Beijing’s assertiveness has also engendered increasing anti-China sentiment among Filipinos.

Earlier this year, the Chinese Foreign Ministry called on Manila to stop its military drills around Thitu Island and Scarborough Shoal, accusing the Philippines of “complicating the situation and escalating disputes.”

The Second Thomas Shoal sits just 105 nautical miles (195km) off the Philippines province of Palawan and within the nation’s exclusive economic zone. The atoll is also within China’s ‘nine dash line’ – a unilaterally defined territorial claim which asserts Chinese ownership over 90% of the South China Sea.

Beijing rejected a 2016 ruling by The Hague-based Permanent Court of Arbitration which threw out its claims in the South China Sea, which is based on historic usage. The Second Thomas Shoal is approximately 650 nautical miles (1,200km) from the southern Chinese province of Hainan.

The Asian regional summit is being hosted by Chinese President Xi Jinping, who told his fellow leaders that Beijing would “never seek hegemony, and certainly not bully the small.”

The potentially resource-rich and strategically important waterways of the South China Sea are the subject of multiple overlapping claims from China, the Philippines, Vietnam, Malaysia, Indonesia, Taiwan, and Brunei.

On Friday, the US warned China that attacking Philippines public vessels would prompt a US response under its treaty obligations.

Follow RT on The French ambassador to Australia, who will soon return to the nation after being recalled by Paris amid a spat over a secretly negotiated deal for US-made

Follow RT on An international team of experts from the World Health Organization is expected to arrive in China this week to investigate the origins of the coronavirus pandemic, as