The European Union’s top court has ruled that Hungary’s 2018 law aimed at criminalizing aiding illegal immigrants who are claiming asylum violates the “rights safeguarded” by the bloc’s legislature.

The Hungarian legislation, passed in 2018, sought to punish anyone “facilitating illegal immigration” with a year in prison, under a bill dubbed the “Stop Soros” law. Hungary’s government justified it at the time by arguing that migrants illegally entering the country threatened its national security.

In the ruling, handed down on Tuesday, the European Court of Justice declared that “criminalizing such activities impinges on the exercise of the rights safeguarded by the EU legislature in respect of the assistance of applicants for international protection.”

The EU’s advocate general, Athanasios Rantos, had urged the court to make such a judgement back in February, claiming the introduction of the legislation meant that “Hungary has failed to fulfil its obligations under the [bloc’s] Procedures Directive.”

It became known as the Stop Soros law after billionaire philanthropist George Soros became a vocal opponent of the Hungarian government’s opposition to migration. The administration, in turn, accused Soros of orchestrating migration to Europe, with the Open Society Foundation, run by the philanthropist, closing its operation in the country in response. 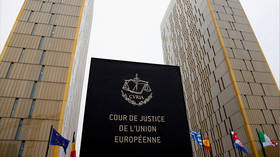 Hungary, under the leadership of right-wing Prime Minister Viktor Orban, has repeatedly clashed with the EU in recent years over its strong stance on immigration and concerns from the bloc about threats to the rule of law in the country.

At the end of 2020, a dispute between Hungary and Poland and the EU risked derailing the bloc’s budget, as both member states were threatening to veto it over their view that the EU was attempting to interfere in their domestic affairs. Ultimately, the EU backed down, agreeing to a compromise with Budapest and Warsaw to ensure the budget secured the support of all 27 member states.

Despite acknowledging the EU court’s ruling, Hungary’s government defended its right to challenge any foreign-funded non-government organizations that are attempting to “promote migration.”

“Hungary’s position on migration remains unchanged: Help should be taken where the problem is, instead of bringing the problem here,” Hungarian government spokesperson Zoltan Kovacs said, adding that the country will challenge outside entities “seeking to gain political influence and interference.”

Follow RT on At least nine Lebanese soldiers have been injured in Tripoli, one critically, by a grenade attack, in a third consecutive night of clashes during protests against ongoing

Follow RT on New Zealand PM Jacinda Ardern and her Australian counterpart, Scott Morrison pledged unity in standing up to various Chinese policies. The show of solidarity came after a