Curbs currently in place in Germany to stem the spread of Covid-19 are not enough, outgoing chancellor Angela Merkel has reportedly told leaders of her conservative CDU party, adding that new infections “double” every 12 days.

“We are in a highly dramatic situation. What is in place now is not sufficient,” Merkel said, according to two meeting participants, AFP reported. New cases have been on the rise in Germany, including among the elderly, who were the first to get their vaccine shots in early 2021. 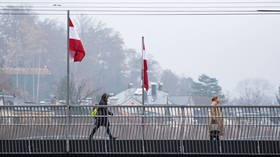 Merkel’s comment comes after Health Minister Jens Spahn warned that by the end of the coming winter, “pretty much everyone in Germany will be vaccinated, cured or dead.”

A meeting of federal and state governments’ last week set new regulations that, according to some media reports, already brought Germany close to a full lockdown for the unvaccinated.

Under the rules, all states which exceed a certain hospitalization incidence level should allow only the vaccinated or recently recovered to access current public venues.

Germany reported 30,643 new cases of Covid-19 on Monday and 62 deaths on Monday, according to the Robert Koch Institute – the national health watchdog. The seven-day new case incidence has also been hitting record numbers in the last two weeks.

Germany is not the only nation struggling to tackle the spiraling fourth wave of Covid-19. In neighboring Austria, a full 10-day lockdown began on Monday, forcing Chancellor Alexander Schallenberg to apologize to those vaccinated over the “drastic step.”

Follow RT on An apparently functional EU Digital Covid Certificate bearing the name of Adolf Hitler has circulated online this week, before being invalidated. The incident raises questions about the

Follow RT on Uganda’s main challenger to the presidency, Bobi Wine, has claimed that the country’s military has besieged his home, as votes are still being counted from Thursday’s poll