RT Creative Lab has recreated the legend of the Russian avant-garde and modern photography Alexander Rodchenko in a deepfake video masterclass series dedicated to the centenary of Vkhutemas and on the eve of his130th birthday.

Rodchenko.LIVE is a series of deepfake videos in which the artist talks about the legacy of the visionary Russian art and design school Vkhutemas (the Higher Art and Technical Studios) – the Soviet counterpart of the German Bauhaus. Rodchenko taught construction and metalwork at Vkhutemas, pioneering design ideas in Russia.

Vkhutemas was established shortly after the Russian revolution in 1917, after which the monarchy was abolished. It was conceived as an institution that would prepare artists and craftsmen with the aim of fulfilling the state’s goals for efficiency and production. But its legacy was short-lived – in 1930 it was closed permanently and its professors purged.

Rodchenko.LIVE will consist of four videos, which will be released in 2021-2022. In the first episode, ‘Experiments for Future’, Rodchenko gives an introductory talk about his life and the creation of a new type of craftsman at Vkhutemas.

“Rodchenko.LIVE project is a meeting point of several types of art – AI technology, theatrical performance, design animation, cinematography, and musical design. In fact, we have got a kind of a digital educational one-man show. It seems to me that for the first time in history deepfake and machine learning technologies were successfully applied to create a full-fledged video series with lectures from a real historical person,” says Kirill Karnovich-Valua, creative director of RT Creative Lab.

The project was developed together with RT’s creative development department, director Alexander Scryabin and Phygitalism – company-developer of visual solutions based on artificial intelligence, augmented and virtual reality.

Rodchenko was recreated in the video using deepfake algorithms – a technology for synthesizing an image with artificial intelligence. The project is unique because only several historic photographs were used.

“Our task was to create several deepfake videos with Rodchenko with a total duration of about 40 minutes and with 4K resolution, having only a few photos fit for this purpose. In comparison, the Dalí Lives project used over 6,000 images, which were obtained from selected videos with Salvador Dali,” says Denis Leonov, project manager from Phygitalism. 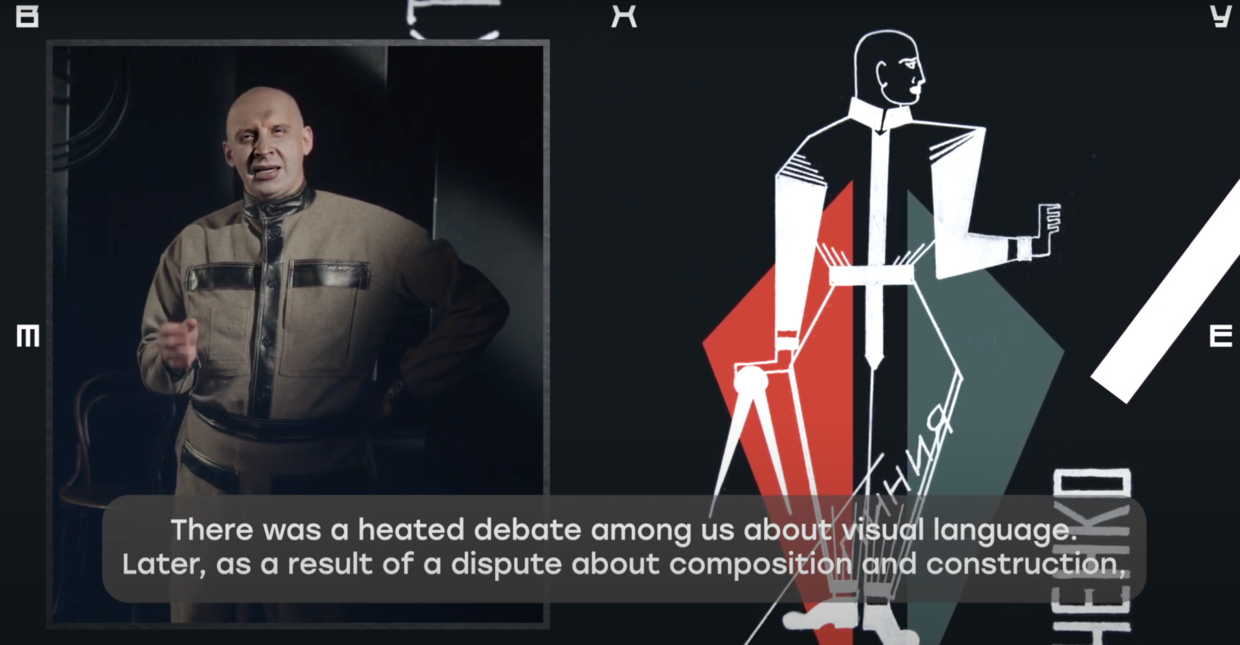 The scripts for Rodchenko.LIVE are based on diaries, memoirs, personal letters, curriculum and art of the avant-garde artist. Some materials were donated to the project by Rodchenko’s grandson, Alexander Lavrentiev, a schol­ar and pro­fess­or at the Strogan­ov Academy.

“De facto we didn’t have any archival film fragments or significant number of photo documents, we re-composed the image of the artist – as we imagined him after studying archives, memoirs, reading interviews with relatives and descendants,” says Alexander Skryabin, director of the Rodchenko.LIVE project.

“While casting actors for Rodchenko’s role, we aimed to not just find the most anatomically similar person (a basic requirement for deepfake), we were also looking for academic enunciation and certain plasticity which would complement the artist’s representation and narration, and as a result would eliminate his artificiality in the frame. Original costume, shoes, and other accessories which were made based on historical photographs, as well as such small details (cap, pipe, cup holder) significantly complemented his image.”

The video series is part of a larger project called Vkhutemas.academy that aims to revive the legacy of the visionary art school using contemporary media formats. The website will be available in English soon.

Tom Hanks has sent a letter and a Corona brand typewriter to an Australian boy who wrote to him about being bullied over his name, Corona, Australian television networks reported

Follow RT on RT has got a sneak peek into the Taliban’s drugs war by talking to patients and doctors at a Kabul hospital. The group promised a ‘narcotics-free’ Afghanistan