Police in Victoria are calling for witnesses after unidentified vandals tried to behead a newly-installed statue of Mahatma Gandhi. Australian Prime Minister Scott Morrison has condemned the “disgraceful” incident.

Morrison unveiled the life-sized bronze sculpture in the Melbourne suburb of Rowville on Friday. Over the weekend, however, “an unknown number of offenders” used a “power tool” to damage it, a Victoria state police spokesperson revealed, adding that detectives were investigating.

“It is disgraceful and extremely disappointing to see this level of disrespect,” Morrison said on Sunday, adding that attacks on cultural monuments “will not be tolerated.” He described Australia as the “most successful multicultural and immigration nation in the world.”

“Whoever is responsible for this has shown great disrespect to the Australian Indian community and should be ashamed,” Morrison added. 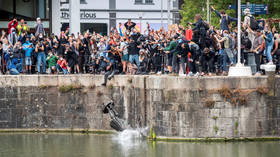 British museums hit back at ‘alteration of history,’ want authorities to stop pulling down statues to please ‘vocal minority’

The Indian government, which donated the statue, is yet to comment, but several Australian political figures have criticized the vandalism. Federal Education Minister Alan Tudge termed it “disgraceful, cowardly, criminal behavior” in a Facebook post, adding that the “vile act” was not “representative of our community … [and] country.”

The statue’s unveiling ceremony on Friday at the Indian Community Centre in Victoria was part of a celebration to mark India’s history and 75 years since its independence.
Gandhi is generally credited for having charted a non-violent path to the country’s freedom from British rule in 1947.

Meanwhile, Vasan Srinivasan, chairman of the Australia India Community Charitable Trust, told Australian media outlets that he did not believe the vandalism was motivated by racism and said the perpetrator “needs some support to make sure he gets well.”

In January, a Gandhi statue in California was toppled and decapitated, while another statue of the freedom fighter in front of the Indian Embassy in Washington, DC was defaced last December. That incident was blamed on Sikh separatists.

Follow RT on Nepalese officials have said that 11 people have died after flooding and landslides, triggered by heavy rain, swept across the country. Chinese and Indian workers are among